Los Angeles is a major city in California. With a 2020 population of 3,898,747, it is the largest city in the state, as well as the second-largest city in the United States following New York City. Los Angeles is known for its Mediterranean climate, ethnic and cultural diversity, Hollywood film industry, and sprawling metropolitan area.  The city of Los Angeles lies adjacent to the Pacific Ocean extending through the Santa Monica Mountains and into the San Fernando Valley, 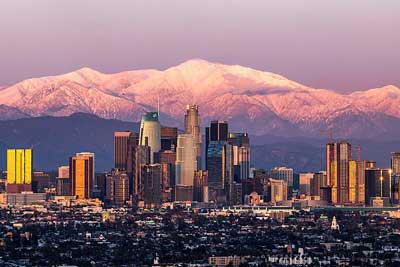 Join us as we drive 1.5 miles along the conjoined Interstates 5 and 10 through east Los Angeles, California. Join us as we drive the final mile of the historic Mother Road in Santa Monica, California. Drive America’s Highways for 8 miles west along the historic mother road from West Hollywood to Santa Monica in California. Drive America’s Highways for 10 miles south along the Arroyo Seco Pkwy (California Highway 110) from Pasadena to Los Angeles in California.